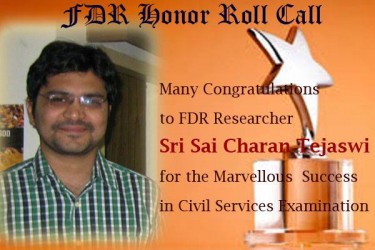 Meet Mr. Sai Charan Enjeti, FDR Alumni, who has been successful in the 2013 Civil Services Exams.

Confident and composed, Enjeti SaicharanTejaswi has a compelling presence and leaves an impression one cannot shrug off. With his recent success in the Civil Service Examinations, Saicharan is feeling very elated about joining the new service. However, he has his eyes fixed on the road ahead and will leave no stone unturned in dispensing his duties with the utmost diligence.

Having outperformed the rest right from his school days, Saicharan has shown consistency and determination in whatever he takes up. iroar clemson . He joined the N.C.C in 2002 and has displayed tremendous amount of comradeship and leadership capabilities as a member of the 1 Andhra Naval Unit.Whether it was academics or extra-curricular activities, he has led by example.

In a candid interview, Charan shares his thoughts with the FDR team and offers a word of advice to civil service aspirants.

First of all, congratulations on your incredible achievement. Was becoming an civil servant always your dream? When and how did it start for you?

Thank you very much. Yes, I did have Civil Services in my mind since I was 10 or 11. That was because my grandparents and parents often spoke to me about the roles and responsibilities of a DM/SP and time and again they talked about me becoming a civil servant one day. Even in my school (All Saints’ High School), many of my teachers motivated the students to opt for the Civil Services . But as a child I only had a vague idea of what exactly IAS or IPS meant. It was not until I reached my engineering 3rd year that I considered Civil Services seriously. It was only then that I started researching about the Civil Services Examination and was fortunate enough to meet some of the seniors in this field who gave me a clear cut idea about this examination and various services.

Did you think of giving up at some point of time? If so, how did you overcome those thoughts and discouragement?

I thought I had given a reasonably good first attempt in 2011 and was expecting a positive result but was a bit disappointed to come to know that I could not even make it to the interview. I felt as if I was left in a dark tunnel and had no clue about the end of it. It was then that my parents and sister encouraged me to write again and I decided to work even harder for my second attempt. I spoke to my colleagues and seniors who were very supportive. Throughout my preparation process, I interacted freely only with those who had a positive bent of mind. This is very important for someone not to get dejected even in the course of successive failures.

You have been working at FDR for quite some time now. How did this experience help you?

I joined FDR after writing my second mains examination. I am very fortunate to have worked on wide ranging issues. I was exposed to areas such as electoral and political reforms, judicial reforms, police and administrative reforms, functioning of local governments, status of welfare of workers in unorganized sector in Andhra Pradesh, Centre-State relations in the context of formation of Telangana, etc. One of the most memorable experiences of mine was the work on presentation to the Justice JS Verma Committee on amendments to criminal law. It was an immense learning experience to involve in discussions and interactions with Dr. Jayaprakash Narayan and Mr. Karthik Chandra while working on these policy issues.  Further, I was also involved in drafting notes, creating presentations and writing articles. On the one hand, my experience in FDR widened my knowledge base which was very fruitful to tackle some newer areas that were introduced in the exam in 2013 such as Governance Issues and Ethics. On the other hand, it also helped me strengthen my writing and presentation skills which are utmost important to have an edge in such a tough competition.

Is there anything you wish you had done differently or any improvements you could have made along the way?

Maybe I could have spent greater time on output/writing rather than on input/accumulating content.

What would your word of advice be for people with similar aspirations and similar backgrounds?

Be positive and never get let down by initial failures. According to me, one’s motivation is more important than one’s ability and if one has the former, the latter can be easily improved.

An Aspirant’s Journey To Success

An Impact that will Endure